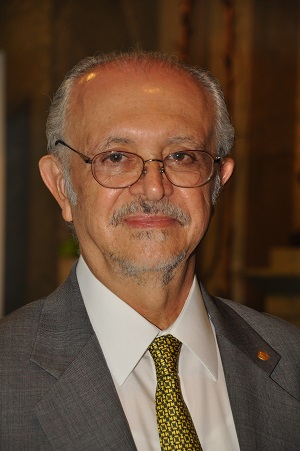 Mario José Molina-Pasquel Henríquez, Ph.D. (1943-2020) was a chemist known for his discovery that chlorofluorocarbon (CFC) gases contribute to the depletion of ozone in the stratosphere. His work was pivotal in influencing countries around the world to commit to eliminating CFC usage. In 1995 he was awarded the Nobel Prize for this work, becoming the first Mexican-born scientist to win the Nobel Prize in Chemistry since its origin in 1901.

Molina earned his Ph.D. in physical chemistry from the University of California, Berkeley in 1972. In his Nobel Prize biography, he describes his graduate work as “the investigation of the distribution of internal energy in the products of chemical and photochemical reactions.”

After earning his Ph.D., he started a postdoctoral fellowship with Dr. Sherwood Rowland at the University of California, Irvine where he began investigating CFCs. By then, CFCs had been used in industrial processes and in household items for decades and were not believed to have any negative effects on the atmosphere. Shortly after joining Dr. Rowland’s group, they published their finding that UV radiation in the stratosphere could break down CFCs to release chlorine atoms. Chlorine atoms can react catalytically with ozone resulting in the removal one of the oxygen atoms. Molina and Rowland predicted that the release of CFCs into the atmosphere could ultimately lead to the destruction of ozone, which forms an important protective layer by absorbing UV radiation from the Sun.

In 1985, ten years after Molina and Rowland began advocating for a global ban on CFC usage, a group led by geophysicist Joseph Farman published their discovery of the ozone hole over Antarctica and attributed this depletion to CFCs. Actions to cut CFC usage were accelerated, resulting in the Montreal Protocol to ban CFCs being ratified in 1989 by 196 nations and the E.U. The treaty has dramatically reduced atmospheric CFC levels, and successfully reversed the growth of the ozone hole.

In his Nobel Prize biography Molina wrote: “I am heartened and humbled that I was able to do something that not only contributed to our understanding of atmospheric chemistry but also had a profound impact on the global environment.”