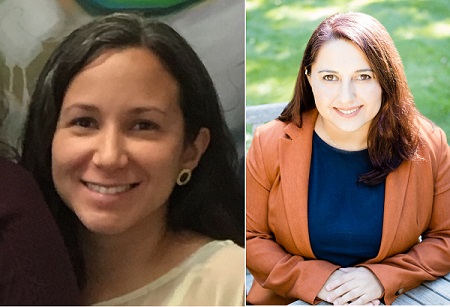 January 13, 2021
A multi-institutional and diversity-focused conference hosted this past week showcased the work of two MB&B post-doctoral researchers. Gamze Gursoy of the Gerstein Lab and Nicole Martinez of the Gilbert Lab attended the virtual Intersections Science Fellows Symposium held September 6-8. The conference aimed to highlight work from underrepresented scientists who aspire to become academic faculty.
According to the symposium webpage, the number of underrepresented minority (URM) faculty are disproportionately low relative to URM students in graduate and post-doctoral phases of their scientific careers. The webpage asserts that “diverse teams in scientific research are more innovative, successful at problem solving, and effective.”
The symposium included topics falling broadly within the biological sciences, including research geared toward biophysics & biochemistry from Gursoy and Martinez.
During the symposium, attendees received access to workshops, as well as direct feedback and mentoring from faculty at participating institutions. The symposium connected participants with hiring universities in order to facilitate career prospects in academia.
Gursoy and Martinez were selected as Fellows of the conference. According to Gursoy, the conference provided a valuable opportunity to prepare for the academic job market and enabled increased diversity in faculty positions.
“Many of the workshops that they provided to the fellows were quite eye opening in terms of guiding us through the interview process including chalk talks,” Gursoy said. She believed the symposium also inspired attendees to strive to become “future leaders that will bring justice to an unequal system.”
The Intersections Science Fellows Symposium is held yearly and accepts application from post-doctoral researchers from participating universities through November. Further details on participating Fellows, faculty, and the program can be found on the conference webpage.
By Brigitte Naughton