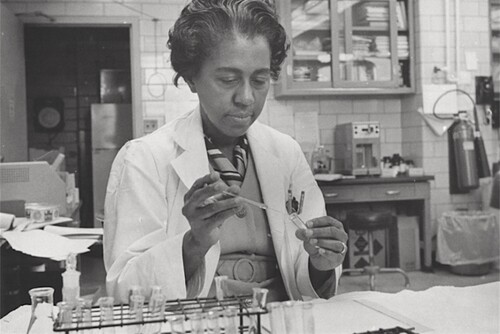 Marie Maynard Daly, Ph.D. (1921-2003) was a biochemist known for her pioneering studies of nuclear proteins and her work on the relationship between diet and heart disease. Daly graduated with a Ph.D. from Columbia University in 1947, becoming the first Black American woman to earn a Ph.D. in Chemistry.

During her Ph.D. Daly studied the chemical products resulting from the digestion of corn starch by pancreatic amylase. Following her Ph.D., Daly held a research position at the Rockefeller Institute in New York City where she studied the nucleus and its contents, developing methods for separating and identifying different fractions of cell nuclei. This work contributed to foundational research on the composition of histones.

Daly then returned to Columbia University where she studied the role of cholesterol in hypertension and atherosclerosis. Later she continued this research as a professor of biochemistry and medicine at Albert Einstein College of Medicine.

Daly was inspired to pursue chemistry by her father, Ivan Daly, who himself had studied chemistry at Cornell University but was unable to complete his degree. Marie Daly grew up in New York City and earned a bachelor’s degree from Queens College and a master’s degree from New York University. She was committed to increasing enrollment of minority students in medical and graduate school. In 1988 Daly established a scholarship program at her alma mater, Queens College, for Black students interested in physical sciences.