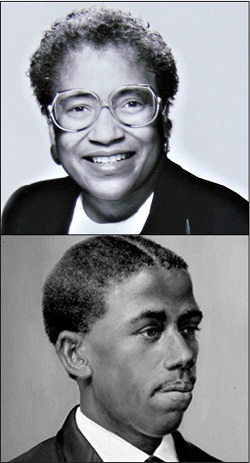 Engineer Willie Hobbs Moore (1934-1994) was the first Black woman to receive a PhD in physics. Born in in Atlantic City, New Jersey, Moore began her undergraduate degree at the University of Michigan in 1954 – the same year that Brown v. Board of Education declared racial segregation in public schools unconstitutional. She continued her graduate studies at the same university, studying theoretical analysis of secondary chlorides for polyvinyl-chloride polymers under the guidance of infrared spectroscopist Dr. Samuel Krimm. Moore earned her PhD in 1972, having published in journals including the Journal of Molecular Spectroscopy, the Journal of Chemical Physics, and the Journal of Applied Physics. Following graduation, she embarked on a distinguished career in industry, holding engineering positions at Bendix Aerospace Systems Division, Barnes Engineering Company, and Sensor Dynamics Inc. before becoming an executive at Ford Motor Company. She is widely credited with spearheading Japanese manufacturing practices at Ford Motor Company. Moore continued to publish in chemistry and physics journals and throughout her career and advocated for minority representation in STEM, following her mantra “you’ve got to be excellent.”

A century prior, Edward Bouchet (1852-1918) became the first Black man to earn a PhD in physics and one of Yale College’s first Black students. Bouchet was born in New Haven and attended one of only three grade schools that permitted Black children. After graduating from New Haven High School and the prestigious Hopkins Grammar School, Bouchet entered Yale College in 1870. Upon graduation, he ranked sixth in a class of 124. Bouchet returned to Yale to study geometrical optics. Only two years later, he defended his dissertation entitled “On Measuring Refractive Indices,” becoming the first Black American and only the sixth American to earn a PhD in physics. Despite his merit, however, Bouchet faced discrimination that denied him a university position. He instead went on to teach chemistry and physics for twenty-six years at the Institute for Colored Youth, Philadelphia’s only high school for Black students, until an all-white board fired him. Bouchet held several teaching positions across multiple states, before returning to New Haven. His short autobiographical piece can be found in the Yale publication Class Record (1912).