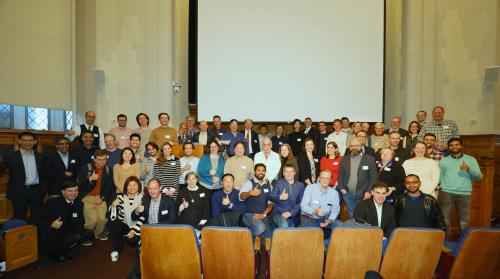 By Lisa Ogawa McLean:  On Friday, January 18th, family, friends and colleagues gathered at a symposium in the Yale Law School Auditorium to honor Tom Steitz, PhD. This one-day event was reflective and inspiring, where attendees were treated to a collection of talks from influential scientists studying various aspects of the central dogma using methods in structural biology.

The symposium opened with former colleague Dr. Richard Henderson (The Nobel Prize in Chemistry 2017), from the MRC Laboratory of Molecular Biology in Cambridge, who talked about his early work with Steitz on solving the structure of chymotrypsin and then on his move to solving structures with electron microscopy. We also heard from Dr. Robert Roeder from Rockefeller University on RNA polymerases, and Dr. Harry Noller from the University of California-Santa Cruz on ribosome translocation, including beautiful structural animations. Dr. Tom Cech (The Nobel Prize in Chemistry 1989) from the University of Colorado-Boulder talked about his lab’s study of ribozymes and ribonucleoproteins. Dr. Jennifer Doudna from the University of California-Berkeley, shared the significant impact Steitz had on her scientific career, both as a postdoctoral fellow at UC-Boulder, where she and Steitz overlapped during one of his sabbaticals, and as faculty colleagues in MB&B during her early independent career. Dr. Doudna presented her early work on the structural biology of the Group I intron as well as her current work on CRISPR-Cas, RNA-guided, adaptive immunity.

Former Steitz lab trainees were also in the lineup: Dr. Lorena Beese from Duke University, and Dr. Martin Schmeing from McGill University. Dr. Beese was a post-doctoral fellow in the Steitz Laboratory and discussed her work on solving structures of DNA polymerase with Steitz. Dr. Schmeing was a graduate student in the laboratory, and in addition to being a part of the team that solved the structure of the ribosome that garnered Steitz the Nobel Prize in Chemistry (2009), he was also known for his structural animations choreographed to music and that he shared with the symposium attendees. Finally, we also heard from Yale University’s Dr. Dieter Söll on tRNA synthetases and non-canonical amino acids, wherein he thanked Steitz for “all the razor-sharp questions” in 30 years of collaborations.

In addition to the science, photographs and memories were a common thread among all the talks shared, from reflections on the years spent in Cambridge and a trip to the Galapagos Islands among other travel adventures, to Nobel Prize dinners and Steitz’s expertise at the BBQ and in cultivating his garden.

Dr. Thomas A. Steitz was a Sterling Professor of Molecular Biophysics & Biochemistry and Professor of Chemistry at Yale University, where he was faculty since 1970. He was also a Howard Hughes Medical Institute Investigator since 1986, and member of the National Academy of Sciences since 1990. During his career he won a number of awards, including the Gairdner Foundation International Award (2007) and the Nobel Prize in Chemistry for studies of the structure and function of the ribosome (2009). In addition to his immeasurable contributions to the fields of structural and RNA biology, his legacy also includes the many students and postdocs trained in his laboratory. Dr. Steitz passed away this past October and will be missed not only for his contributions to science and scholarship, but also by family and the many friends he has made through his life dedicated to solving The Structural Biology of the Central Dogma.

Recordings of the symposium and memorial service are available for viewing via the Thomas Steitz Symposium page https://tomsteitzsymposium.yale.edu/links-videos-memorial-and-symposium-speakers