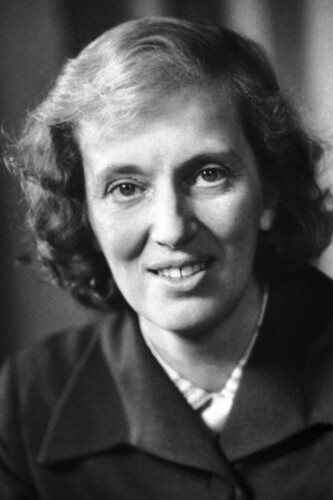 Dorothy Crowfoot Hodgkin, Ph.D. (1910-1994) was a chemist known for her significant contributions to the development of X-ray crystallography as a method for determining molecular structures. In 1964 she was awarded a Nobel Prize for this work, becoming the third woman to win the Nobel Prize in Chemistry since its origin in 1901. No other women were awarded this prize after her until 2009 when Ada E. Yonath won for her studies of the structure and function of the ribosome.

Hodgkin earned her Ph.D. in 1937 from the University of Cambridge with her thesis titled X-Ray Crystallography and the Chemistry of Sterols. She went on to publish the first molecular structure of a steroid (cholesteryl iodide) in 1945 and to confirm a controversial structure of penicillin in 1949. However it was her determination of the structure of vitamin B12 in 1955 that greatly contributed to her winning the Nobel Prize nine years later.

One of Hodgkin’s final, and most significant, accomplishments came in 1988 when she published a high resolution structure of insulin – a molecule she had been studying for over 50 years since she first received a sample as a graduate student in 1934.

Later in her career, Hodgkin devoted herself to humanitarian issues, promoting peace between nations, and uniting scientists around the world. From 1975-1988 she served as the president of the Pugwash Conferences on Science and World Affairs, which originated from a call for scientists to discuss the danger of nuclear weapons and the role of scientific research in reducing global conflict.