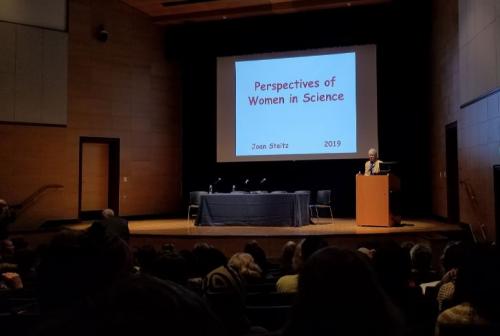 By Lisa Ogawa McLean:  On Wednesday, March 6th, in the Harkness Auditorium at the Yale School of Medicine, Dr. Joan A. Steitz was honored with the Second Annual Perspectives of Women in Science Lectureship by the Yale School of Medicine at a symposium entitled, “Metamorphosis: Perspectives on Science and Mentorship Along the Career Trajectory.” Joan A. Steitz, PhD, is Sterling Professor of Molecular Biophysics and Biochemistry and Howard Hughes Medical Institute Investigator. She has been the recipient of a number of awards, including more recently the 2018 Lasker-Koshland Special Achievement Award in Medical Science that she received for her leadership in the field of RNA biology and scientific mentorship.

The Perspectives of Women in Science Lectureship was given by Steitz at the end of an afternoon full of talks from investigators at different stages along the academic career trajectory. Each speaker not only introduced the audience to their unique path in academia and their research interests, but also happened to be trained by Steitz at an early stage in their career, thus yielding a number of anecdotes on what it was like to be mentored by the incredible scientist and mentor that Steitz embodied and how she has positively impacted their career.

After a short introduction by the Dean of the Yale School of Medicine, Dean Robert Alpern, Dr. Mingyi Xie from the University of Florida kicked off the event with a brief introduction into his laboratory’s work on microRNAs and reflected on Steitz as a role model that taught him, among other things, how to be more efficient. Xie was a recent postdoctoral fellow in the laboratory of Steitz and provided the Early Career Perspective on a career in academia.

Following Xie were talks by Drs. Heidi Cook-Anderson and Gia Voeltz, the Junior Faculty and Mid-Career Perspectives, respectively. Cook-Anderson was an MD/PhD student in Steitz’s laboratory and discussed not only her non-linear path to starting her new laboratory at UC San Diego, but also reflected on Steitz as an inspiring example of a mentor in the sciences, who not only exemplifies “unwavering optimism” but who is also “fearless.” Voeltz also attained her PhD in Steitz’s laboratory after receiving astute advice from her undergraduate mentor to “go to Yale, and work for Joan Steitz.” Voeltz dazzled the audience with beautiful microscopy of a dynamic endoplasmic reticulum, and reflected on Steitz as a generous, kind, and supportive mentor.

Dr. Susan Baserga provided an Advanced Career perspective at the symposium and is a former postdoctoral fellow of Steitz, and now also Professor of Molecular Biophysics and Biochemistry at Yale. She not only talked about her research on the nucleolus and discovery of new protein regulators of nucleolar function, but also reflected on Steitz as someone who “believed in my work when it felt like no one else did.” She was proud to say that Steitz is not only a mentor, but now also a colleague and friend.

Following Baserga commenced a panel discussion and then a talk by Dr. Nancy Andrews, former undergraduate in the Steitz laboratory and former Dean of the Duke University School of Medicine, providing the Dean’s Perspective on a career in academia. While the panel discussion focused on broad discussion among the audience and panel members that was facilitated by questions regarding expectations in academia, how to balance career and family, and equity/inequity in workload and pay; former Dean Andrews talked extensively about her experience as a dean and provided advice on navigating and negotiating in an academic career.

Finally, the symposium culminated with the Second Annual Perspectives of Women in Science Lectureship, where Steitz opened by telling her inspiring path as a woman in science when there were few women in the academy. She told of her experiences in the laboratories of Drs. Alex Rich and Joe Gall, as well as her decision to pursue a PhD in her second-choice lab of the Nobel Prize winner, Jim Watson. She shared with us her adventures and discoveries in the noncoding RNA world, citing that her research was “driven by serendipity” and her “fixation on base pairing.” And, she also shared with us her advice for mentees, including “go to meetings,” “take on the most challenging questions,” and “if making discoveries in science gives you joy, go for it!”

In all, “Metamorphosis: Perspectives on Science and Mentorship Along the Career Trajectory” was an inspiring day of talks by incredible leaders and scientists that was not only exciting, but also motivating for all who were fortunate to have attended this affair.

For more on Dr. Joan Steitz’s laboratory and research:

For more on the annual lectureship, including previous honorees: https://medicine.yale.edu/mdphd/overview/lectures_workshops/perspectives.aspx