Mary Ellen Jones: A Remembrance on Her 100th Birthday 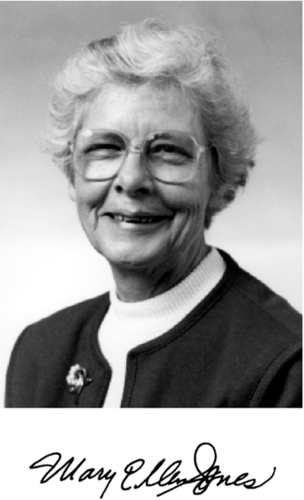 Mary Ellen Jones was born one-hundred years ago, on December 25, 1922, and went on to become one of our most distinguished alumni and the namesake of the department’s dissertation prize.  She joined the lab of Joseph Fruton, a new assistant professor in the Department of Physiological Chemistry at the Medical School; her dissertation (completed in three years) was entitled, “Purification & Properties of Cathepsin C.”  Every phrase in that sentence needs some explanation!

Joe Fruton’s lab studied protein synthesis, but not by ribosomes (which weren’t discovered until the mid-1950s).  Instead, he believed that proteins were made by proteases acting in what we consider the backward direction.  (Remember the concept of microscopic reversibility?)  This was an exciting idea for many years, but Fruton held on to it well beyond its expiration date.

This background on Joe Fruton’s lab provides the context for Mary Ellen Jones’s dissertation.  Cathepsin C is a cysteine protease that we now know cleaves dipeptides from the N-termini of proteins.  She studied Transamidation Reactions Catalyzed by Cathepsin C (the title of her main publication), which loosely means the swapping of one amino group for another.  If a peptide is energetically activated, “this transamidation reaction lengthens the [dipeptide] chain by one amino acid reside” (last sentence of the Abstract to her dissertation), in other words, peptide synthesis.  The hope that this approach and a large enough collection of proteases (synthases) could produce our panoply of proteins was never realized.

Dissertation contents and formatting have changed somewhat since 1951.  Can you imagine typing your dissertation (on a typewriter) and making as many as seven copies (using carbon paper)?  There are 29 meticulously laid out tables (some full page), chemical structures, hand-written symbols, and six figures containing glued-in photographs.  I don’t want to hear ANY complaints about the difficulty of reformatting published work into dissertation chapters!  If you want to see the dissertation, it resides with many others in C-125A.  (At least it will once I return it!  And it you’re anything like me, pop an antihistamine before flipping through the musty pages.)

After Yale Mary Ellen Jones did a postdoc with Fritz Lipmann.  While she was in his lab, he shared the Nobel Prize with Hans Krebs for his discovery co-enzyme A.  She became a founding member of the Department of Biochemistry at Brandeis and subsequently moved to the University of North Carolina at Chapel Hill and the University of Southern California.  She returned to UNC in 1980 to become the first female chair of a department at the medical school (Biochemistry) and the first women at UNC to hold an endowed chair.

Mary Ellen Jones discovered carbamoyl phosphate (a key component of the urea cycle and of nucleotide biosynthesis).  She studied textbook enzymes involved in amino acid and nucleotide metabolism and was one of the first scientists to study multifunctional enzymes.  Among her MANY honors were memberships in the National Academy of Sciences and the American Philosophical Society, and receipt of the Wilbur Cross Medal from Yale’s Graduate School.  She was also a very active scientific citizen, serving as president of the Association of Medical School Departments of Biochemistry, of the American Society for Biochemistry and Molecular Biology, and of the American Association of University Professors.

Her most prominent recognition is serving as the namesake for a large eleven-story research building at UNC (listed on one of UNC’s websites as “Jones Building, Mary Ellen”).

I hope you remember her next spring when we announce the recipient(s) of the Mary Ellen Jones Dissertation Prize.  The Prize has been awarded to 23 graduates since its creation in 2008.