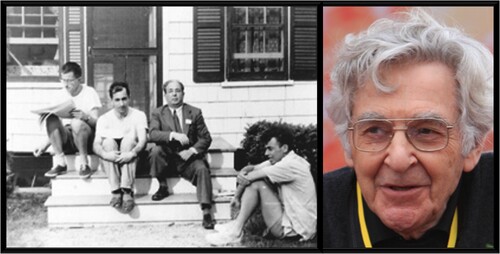 Alan Garen, PhD, died on April 20, 2022 after a prolonged illness. He was 96 years old. Professor Garen received his PhD from the University of Colorado and was a student of Ted Puck and a postdoctoral fellow with Al Hershey and Seymour Benzer, and later a postdoctoral associate with Cyrus Levinthal as he established the first molecular biology laboratory at Massachusetts Institute of Technology. He became an associate professor of microbial genetics at the University of Pennsylvania before being appointed to professor of molecular biology in the Department of Biophysics at Yale in 1963.

Professor Garen was always interested in big scientific problems that faced molecular biologists. He was among a distinguished group of scientists who helped to establish the field of what we now refer to as “molecular biology.” This cohort included Francis Crick, Jacque Monod, Francois Jacob, Sydney Brenner, and Seymour Benzer.

Professor Garen received the Selman A. Waksman Award in Microbiology in 1962. He was elected to the American Academy of Arts and Sciences and to the National Academy of Science for his pioneering work and discoveries. In an early set of experiments, he found that there were three triplet codons that terminated transcription of mRNA but that this termination could be suppressed by certain tRNAs resulting in extension of the encoded protein sequence. These three “stop codons” thus provided punctuation in the genetic code and were crucial for understanding important aspects of transcription and translation. He is, therefore, admirably referred to as “the man who put a period in the genetic code.”

Professor Garen subsequently turned his attention to Drosophila fly genetics when others identified mutants that caused a leg to be replaced with an antenna. These alterations were caused by mutations in the homeotic genes of this species. In more recent times, he studied a tumor suppressor protein called PSF that bound to the promoter of proto-oncogenes preventing their transcription. He found that this transcriptional suppression could be reversed by binding of certain long noncoding RNAs whose levels were increased in cancer and that this resulted in tumor formation.

Professor Garen’s long and exciting career added luster to the MB&B department. He was known for his rebellious nature and sharp sense of humor. He was a unique character and will be sorely missed.

Prepared by his family and Bill Kongisberg, PhD.