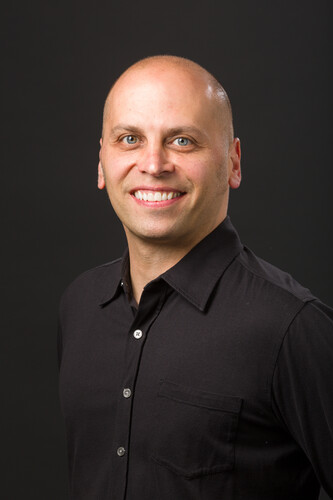 This month’s faculty spotlight is Enrique De La Cruz, Ph.D., a Professor of Molecular Biophysics and Biochemistry. Enrique also serves as the Head of Branford College and is currently the Chair of the Molecular Biophysics and Biochemistry department. He has been with the MB&B department since 2001 where he has dedicated his expertise studying three major topics: the mechanical properties and kinetics of the actin cytoskeleton, RNA helicases, and signaling enzymes involved in calcification and mineralization.  Over the years, he has won numerous awards for his research including the NSF CAREER award, the American Heart Association Established Investigator Award, a Hellman Family Fellowship, and most recently was named one of Cell Press’ 100 inspiring Hispanic/Latinx scientists in America.

De La Cruz is a first generation Cuban-American who was raised in Newark, NJ. He attended Rutgers University in Newark for undergraduate where he got a degree in biology and chemistry. He then went on to earn a Ph.D. in Biochemistry, Cell & Molecular Biology at Johns Hopkins University School of Medicine under the mentorship of Dr. Thomas D. Pollard (who is now an MB&B professor here at Yale.) After receiving his Ph.D., he did his postdoctoral training at the University of Pennsylvania School of Medicine in the labs of Drs. H. Lee Sweeney and E. Michael Ostap. He has also been a visiting scientist at multiple institutions around the world including the Centre National de la Recherche, The Institut Curie, and the ESPCI Paris Tech. De La Cruz then joined MB&B in as an assistant professor in 2001 then rose through the ranks to become full professor and, currently, chair of the department. The following are a few highlights from my interview with De La Cruz on his life, career, and experiences as a Cuban-American is STEM.

De La Cruz had his first research experience when he was only 16. His school, Kearny High School, had a work study program, but it was not normal for high schoolers to do research at this time. Usually, students worked in places like printing presses, automobile repair shops, and other similar jobs. De La Cruz, though, was able to work study at a pharmaceutical company called Hoffman-La Roche.

“With Hoffman-La Roche, I’d go to school for half the day, and then I’d go to HL and that’s where I learned about research. It was really interesting work! What we were doing was strange because in hindsight you realize how significant it is. The chemists were synthesizing compounds– which I knew very little about– but what we would do is we had these rats that were on high cholesterol diets, and we would literally just feed these drugs and then measure their cholesterol content. I was running chromatography and all this stuff, and I did cell culture, too!  But it was that experience that made me really, really want to be a scientist. Well, I wouldn’t say ‘be a scientist’ but rather got me interested in science.

He only applied to one university, Rutgers at Newark, since he lived in the area. He attended and received a B.A. in Biology and Chemistry.

“And when I got there, I participated in what is called the Minority Biomedical Research Support program– MBRS program. I worked 20 hours a week in a lab. And again, it was basically cell biology type studies looking at amino acid transport. And that experience was really– it was transformative! I love that MBRS program and the people involved in that.”

“There’s almost this flow that leads everyone into medical school right. I felt it was particularly pronounced in a small place like Newark because every single biology major, which I was, was a premed. I took the MCAT, and I did exceptionally well, but eventually I decided not to go to medical school because I didn’t really want to do it. Sadly, it was the first time in my life that I really started to think of ‘what did I want to do?’ Everything else was just like work, work, work, work, work. You have somewhere to go and something to do. But you don’t really think of what it is you want to do or how you’re going to spend the rest of your life. Right? And as a Cuban American, first-generation Cuban, my mother, father and sister were born in Cuba. Being a medical doctor has some pretty significant weight on it. It’s very desirable! But I decided not to go! and I really indebted to my family, my parents, they were so supportive, and they’re like, ‘Well, you can do whatever you want, but you have to do something! You’re not just going to walk around and play soccer all day!”

He decided he wanted to earn a PhD and become a professor because he really enjoyed the teaching aspect of being academic.

“I wanted to be a teacher. It wasn’t even research. I was so enamored. That might not be the right word, but I was just so appreciative, and I admired my professors at Rutgers for just their commitment to undergraduate education and teaching. It was life changing and made me want to be a teacher. So, the guy I was working for said I needed to get a PhD. I hadn’t taken the GRE, so when I graduated from Rutgers, I took a gap year and worked in the lab in the physical chemistry lab and I loved it!”

On how he got into the actin field:

“I took this class in the evening during my gap year on cell biology, and the professor talked about the actin cytoskeleton, and I thought it was the coolest thing that ever was!

And then I asked him, I asked my professor, ‘Who’s the best person in the active field?’ And he said, ‘Tom Pollard, no question about it.’ This was 1991 by the way, and so I said, ‘all right, I’m going to go work for Tom Pollard.’”

De La Cruz was also interested in ion channels and membranes for possible graduate study topics. He wrote three handwritten letters to scientists, one of those scientists being Tom Pollard, to professors in those fields.

“In writing the letter, I was just asked expressing interest in asking if there’s room in their lab if I were to come to graduate school there. The membrane biophysics person I never heard back from. The person in the ion channel field told me if you’re interested in graduate school, you don’t apply to a lab, you apply to a program. It was a very terse letter, but it was accurate. There wasn’t much encouragement, let’s say.”

“And then from Tom Pollard, I got this beautiful long handwritten letter. And then I got into Hopkins and I got my PhD with Tom! Because of that, now when I get an email from a student, I always write back! It doesn’t matter where they’re from. I always write back to students because that was what made me say, ‘this is the guy I want to work for,’ because at that age, I could have work on anything as most graduates know. But it was Tom that made me realize that this is the kind of people I want to surround myself.”

On being a scientist who engages with his community:

Not only does De La Cruz run his own research lab, he also is chair of MB&B and head of Branford college. He also participates in numerous committees, organizations, and outreach events.

“That’s what we do as scientists. It isn’t just go to the lab and do research and maybe work with a couple of people in my lab. That’s not the only stuff we do. Educating people, mentoring, serving on committees, going out and talking to politicians, advising the NIH and the NSF, going out to high school so that people can see science, that’s what we do. That’s part of our freaking job!”

Although De La Cruz stressed the importance of all the different aspects of what scientists can and should do, he also emphasized that people should not overexert themselves by trying to do too much. It’s better to effectively do a few things that are important to you, rather than saying yes to every opportunity without the capacity or time to follow through.

“And it’s hard sometimes. I mean, I can tell you it’s hard being chair of a college. You know, it’s really hard, but it’s what I do. And in a zero-sum game, you have to compromise. I just said no to reviewing some papers this week. I had to say, yeah, I can’t do it. I’m teaching a new class. I wouldn’t do a good job [reviewing papers] right now. I’m sorry. And you have to get better at saying no. But the notion that our job is just research is misleading and irresponsible.”