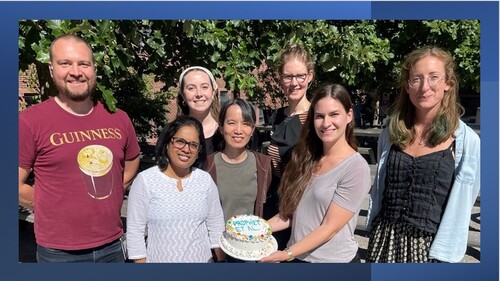 The Schlieker group recently provided deeper insight into the effects of nuclear envelope (NE) blebbing, the hallmark phenotype of Torsin A disruption involved in the debilitating neurological movement disorder DYT1 dystonia. In their paper titled “Atypical nuclear envelope condensates linked to neurological disorders reveal nucleoporin-directed chaperone activities”, the group uncovers mechanisms that may point to how these NE herniations, called blebs, contribute to disease development. Through a comparative proteomics approach, NE blebs were found to sequester ubiquitinated proteins, allowing short-lived proteins to evade degradation and become stabilized. In addition to these proteins, the composition of the blebs were highly enriched for FG-Nups such as Nup98, the previously identified MLF2, and molecular chaperones of HSP70 (HSC70 and HSPA1A) and JDP (DNAJB2 and DNAJB6) families. The sequestration of chaperones by MLF2 are thought to contribute to proteotoxicity, by allowing toxic inclusions to form in the chaperones’ absence from the cytosol.

The group probed the formations of these NE herniations further, discovering that blebs required Nup98 to form and harbor FG-rich condensates. Through both cellular and in vivo approaches, MLF2 in complex with HSP70 and DNAJB6 was implicated in the formation of larger, distinct condensates that required chaperones to preserve their integrity over time.

Together, the paper demonstrates mechanisms of proteotoxicity in the context of condensate formation and describes FG-nucleoporin-directed activities for a nuclear chaperone network. The study was performed by MB&B members from the Schlieker and Koleske labs, including Sarah Prophet, Anthony Rampello, Robert Niescier, Juliana Gentile, and Sunanda Mallik. Read more on their interesting finds at Nature Cell Biology here.