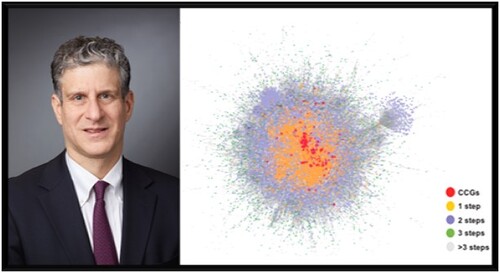 A group from Yale Cancer Center, including MB&B Professor Mark Gerstein, PhD, published results that identified new cancer driving genes from an analysis of 12,767 human genes. The study expands the current repertoire of known cancer-relevant genes and broadens our understanding of how pieces of our genetic code can act in concert toward either proliferation or restriction of cancer progression.

The group applied STRING (Search Tool for the Retrieval of Interacting Genes/Proteins) analysis to categorize the genes into one of four sets depending on their nearest relationship to at least one of 468 known “cancer driver genes,” those whose mutations can promote cancer. The researchers then applied a gene dependency score, or a measure of importance in cancer proliferation, to identify new “passenger genes” connected to known cancer promoting ones.

Published results from the team indicated that “genes closer to cancer genes show greater connectedness in the network, have greater importance in maintaining cancer cell viability, are under greater negative germline selection pressure, and have higher somatic mutation frequency.”

The cancer biology field focuses largely on targeting – either directly or indirectly – a handful cancer driver genes, for example, TP53, KRAS and BRCA genes. The new findings demonstrate that a larger number of genes are connected to cancer drivers and may have a functional relevance in the onset and progression of cancer. The effect of a mutation in one of these passenger genes can vary among cell types and individuals, and future studies toward understanding their impacts may require precision-based approaches.