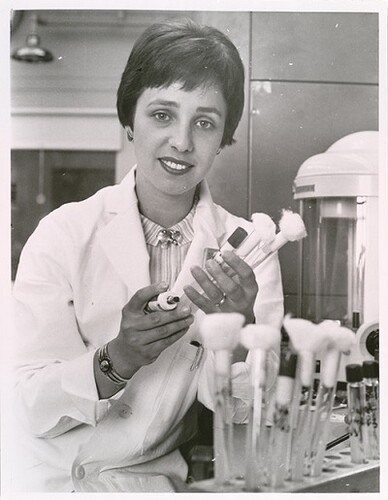 Molecular biologist and Yale University alumnus Maxine Frank Singer contributed crucial insights into deciphering the genetic code through her research on enzymes that regulate nucleic acid synthesis. Throughout her career, which included serving as Chief of the Laboratory of Biochemistry at the National Cancer Institute, Singer argued for ethical considerations in approaching recombinant DNA technology.

Born in New York in 1931, Singer received a chemistry degree from Swathmore college before joining Yale University to study under Jospeh Fruton. She earned her PhD in 1957, specializing in protein chemistry and nucleic acids. Following her doctorate degree, Singer joined the National Institutes of Health in 1956, where she produced RNA sequences used to match each of the twenty amino acids to a specific RNA triplet. She later focused her research on long interspersed nucleotide elements (LINE), seeking to understand the mechanism of LINE replication and genome insertion. She found that retrotransposon location could cause mutations in neighboring genes and lead to genetic disease. Singer then served as president of Carnegie Institution of Washington from 1988 until 2002.

In a 2006 Science article, Singer responded to the underrepresentation of women in science. “National needs, equity, and common sense speak with one voice,” Singer said. “Schools and universities must find ways to encourage and ease the path for women who are inspired by the great scientific adventure.”

Singer has written several books and published over a hundred scientific articles.

She was elected a Fellow of the American Academy of Arts and Sciences, received the National Medal of Science, the Public Welfare Medal, and was the first woman to receive the Vannevar Bush Award.