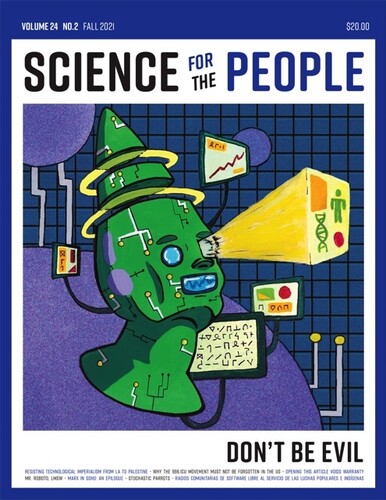 Science for the People originally started as a scientist-driven anti-war movement in the late 1960’s and ran until 1989. It was recently revived in 2015 with a focus on anti-racism, climate justice, and analyzing the role of technology in society. The organization has local chapters throughout the U.S. and, as described on their website, “organizes scientists, activists, students, and scholars to face these issues head-on in research institutions, universities, and communities.”

The Science for the People magazine is run by volunteers organized into working groups including an editorial collective and an art collective. The magazine produces three to four issues per year. Each issue is centered around a theme, and submissions for article pitches are open to the public.

The Fall 2021 issue for which Thrasher served as Art Editor is entitled ‘Don’t Be Evil’ – a reference to Google’s former motto – and features articles about technology and capitalism. Thrasher created the cover art that captures this theme, as well as an inside illustration for an article on labor philosophy in the context of technological advances.

Thrasher primarily works in pen and paper, and used a hybrid approach with digital editing to create this cover. He started by sketching his illustration in pen, then scanned and edited it in Photoshop to add color and background.

You can order a digital or print copy of the issue, or sign up for an annual subscription to the magazine here.

You can find more information about getting involved in the organization and subscribing to their newsletter here.