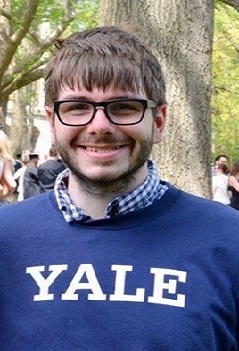 Seth’s research in Ron Breaker’s lab focuses on the study of ornate, large, extremophilic (OLE) RNA.  In email correspondence, Seth stated that he is intrigued by OLE RNA because not only because of its structural complexity, but also because the structure is largely conserved among all the organisms that have it.  “These observations prompted us to hypothesize that this RNA is actually a ribozyme and perhaps a relic from the RNA world,” he says.

Previously, it has been established the OLE RNA participates in stress response mechanisms in Bacillus halodurans, and that this response requires the formation of a ribonucleoprotein complex containing at least two known OLE-associated proteins (OAPs). Seth’s project is to determine the total protein make-up of these ribonucleoprotein complexes and if the make-up changes dependent on the type of stress condition.

“We hope that this study will provide further clues on the function of OLE RNA,” Seth explains, and that this research would enable further experiments like “reconstituting [OLE RNA] activity in vitro or in a surrogate organism.”

Seth previously studied at Ohio State for his undergraduate work, where he worked in the lab of Venkat Gopalan studying human mitochondrial RNase P and improving RNA labeling techniques.

Seth mentioned that he is very grateful to his mentors and the role they played in his life. “I have witness firsthand how influential good caring mentors can be,” he says, “and I am committed to fulfilling this role for the next generation of scientists in whatever ways I can.”

Once again congratulations to Seth and his award!