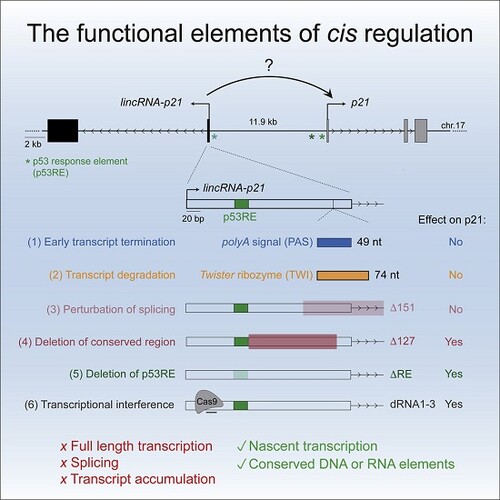 In a new article published in Cell Reports, Lauren Winkler, Ph.D., and colleagues in the Dimitrova and Simon labs uncover the molecular mechanism of the cis-regulatory activity of the long noncoding RNA (lncRNA) lincRNA-p21.

The cis-regulatory role of lincRNA-p21 in activating its neighboring gene, p21, had previously been characterized, however the functional elements of lincRNA-p21 were not well understood. To this end, Winkler et al. developed genetic tools to investigate each component of lincRNA-p21 production and cis-regulation, including the transcription, splicing, and accumulation of transcript. With these tools, they found that nascent transcription of lincRNA-p21 alone is sufficient for cis-activation of p21.

The authors describe their work in a brief overview accompanying the article: “Winkler et al. analyze a series of genetic models to show that full-length production, splicing, and transcript accumulation of the long noncoding RNA lincRNA-p21 are dispensable for its role as a transcriptional activator of the neighboring gene p21. Instead, nascent transcription through conserved regions of lincRNA-p21 is sufficient for cis-activation.”

In addition to describing the mechanism of cis-regulation by lincRNA-p21, Winkler and colleagues emphasize the importance of using multiple genetic approaches to investigate functional elements of lncRNAs.