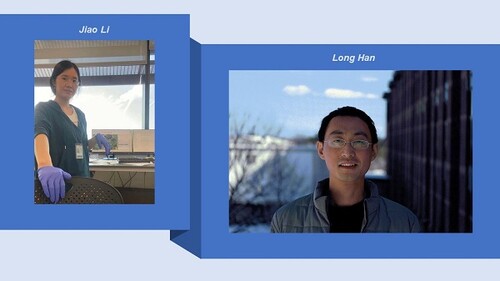 In a recent article published in the journal Proceedings of the National Academy of Sciences, the Zhang lab along with collaborators, including Gennis (University of Illinois at Urbana-Champaign), Zhu (Nanjing University of Chinese Medicine), and Clarke (Columbia University) labs, jointly determined two high resolution cryo-EM structures of the proton pumping cytochrome bo3 ubiquinol oxidase and revealed how ubiquinone binds to a dynamic substrate binding sites in atomic details.

Quinol oxidases are members of the heme-copper superfamily of respiratory oxygen reductases that have evolved from cytochrome c oxidases. They directly oxidize quinol and reduce oxygen to water, and simultaneously generate a proton motive force across the membrane that drives ATP synthesis. The first structure of bo3 in the apo state was reported two decades ago. However, it has been a major long-standing question to define the quinone binding site(s) and reveal the details of how quinone interacts with its surrounding, due to the high molecular dynamics in the substrate binding sites. Despite extensive research on cytochrome bo3, even a tiny step toward structural details of the quinone substrate in its near-native states has proved to be exceedingly tough. Zhang and collaborators solved the problem by using styrene-maleic acid copolymer nanodiscs to directly capture the native conformations of bo3 in its native lipid environment for cryo-EM analysis and using in-membrane scaffold protein nanodiscs to reconstitute the protein in the phospholipid bilayer which captured a different state.

The two high resolution cryo-EM structures determined by Zhang and collaborators reveal one equivalent of ubiquinone-8 (UQ8) in the dynamic substrate binding site as well as several phospholipid molecules. Both structures show carbonyl O1 of the UQ8 headgroup hydrogen bonded to D75 and R71 in the subunit I. The study reveals two different conformations of a key residue H98 that serves as a conformational switch to turn on and off its interaction with UQ8, which leads to a model for how protons are transferred in atomic details.

Co-first authors include Jiao Li, a former visiting Ph.D student who performed the majority of biochemical and cryo-EM studies in the Zhang lab, Long Han, current postdoc in the Zhang lab who mentored Jiao on cryo-EM and participated in cryo-EM data collection and analysis, Francesca Vallesec, an associate research scientist from the Clarke lab at Columbia University. Zhang, Gennis, Clarke and Zhu are co-corresponding authors.